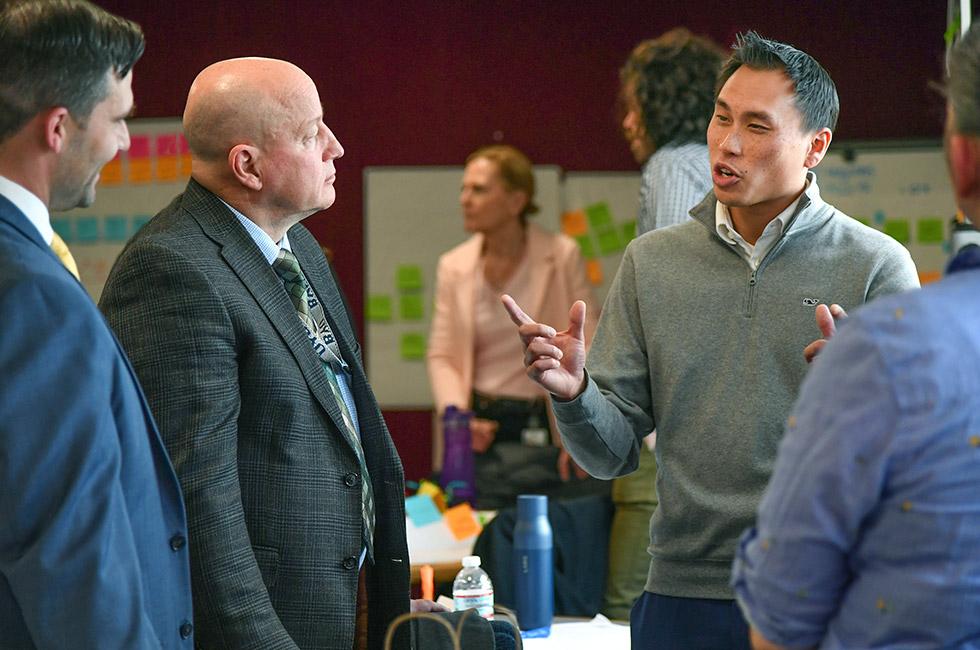 According to organizers, the NSIN Bootcamps provide methods for innovation in the context of real-world problems.

“Bootcamp attendees have a chance to address a challenge specific to each organization through human-centered-design-problem-solving methodology,” said Rose Butchart, NSIN program manager. “We want everyone to be engaged and for it to be meaningful.”

The 30 Hanscom participants, from different offices across the base, focused on how the contracting community can balance risk while still remaining compliant as the Air Force moves to be more flexible and agile. During the four-day course, the attendees broke into six teams looking at the varying aspects of the challenge and then pitched a proposed solution to senior contracting officials from the base. Ideas ranged from new tools to expedite reviews to cross-training and informational sessions.

Dorothy Febbi, Operational Contracting chief, who attended the workshop, said it was a good experience.

“We had a wide cross-section of participants from brand-new buyers to GS-15s, PCOs [procurement contracting officers], branch and division chiefs working together on how to think outside the box to innovate, but within the rules and regulations,” she said. “All contracting orgs on base were represented, including operational contracting, FFRDCs [Federally Funded Research and Development Centers] and SPOs [system program offices]. As program offices do things differently, it was good to have the varying perspectives.”

Febbi added that some attendees had worked outside the Air Force and the government and that it was helpful to have those viewpoints as well, mentioning how when they had a class exercise to flip something on its head, each team came up with something different, which both the NSIN personnel and instructors said was unusual.

Another attendee, Bill Granfield, from the Command, Control, Communications, Intelligence and Networks Directorate, said the workshop offered some unique approaches to tackling the challenge.

“We came up with a lot of solutions,” he said. “Hopefully we’ll be able to implement some of them.”

Tony Braswell, Hanscom’s director of Contracting, who was the senior official the teams pitched to, talked about the need for change at all levels during his remarks.

“I see willingness at the working level to change thinking and break barriers. Now as senior leaders we need to create an environment where you can be comfortable doing that,” he said. “The environment today is a brand-new world, and we can’t be the stumbling blocks. We need to be the ones busting the doors down.”

He added that culture change is not an easy thing, and asked the attendees to go out and be advocates for collaborative thinking.

“These are unique times,” he said. “It feels different than other initiatives in the past. We need to embrace it, otherwise we’ll lose the opportunity.”

NSIN is a Department of Defense organization with a mission to build a new network of innovators that generate solutions to national security problems. These intensive workshops help participants generate new ideas and strategize viable solutions to current issues.