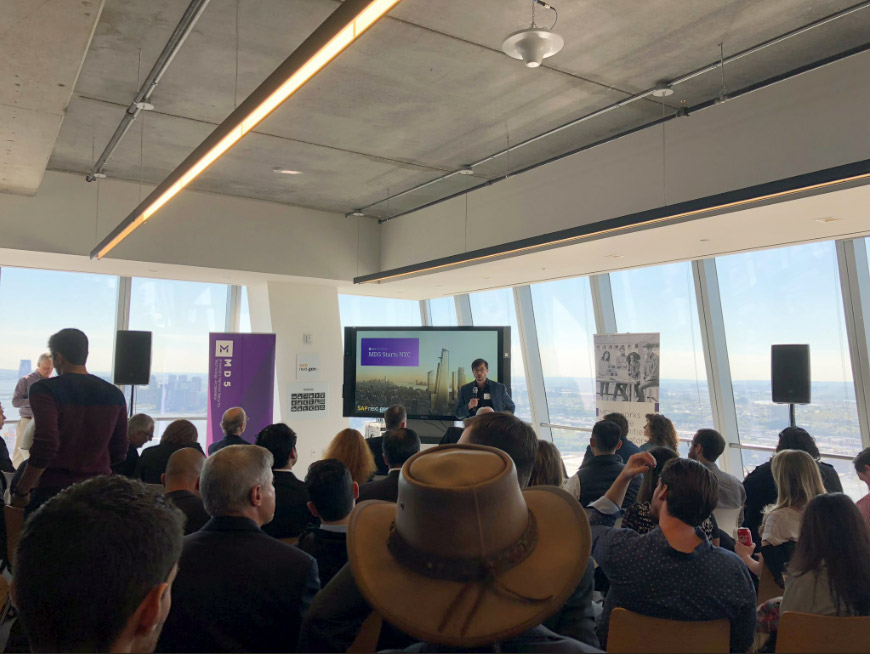 NEW YORK — On the 48th floor of 10 Hudson Yards — part of a New York City high-rise complex with boutique shops, offices and restaurants — companies lined up to pitch new artificial intelligence technology to the Defense Department.

The event was hosted by the National Security Innovation Network — which recently changed its name from the MD5 National Security Technology Accelerator — in support of the Pentagon’s Joint Artificial Intelligence Center, or JAIC. It brought together companies focusing on AI and cyber to pitch their technology to defense and government leaders.

Air Force Lt. Gen. John N.T. “Jack” Shanahan, the director of the JAIC, said the gathering was a big opportunity for the center.

“What we’re trying to do is really put together the entire tapestry of what it takes to get a capability into the hands” of warfighters rapidly and at scale, he said during remarks before a small crowd of industry. “Those are challenging things to do and the department hasn’t been very good at in some of the areas that we’re talking about today.”

Company representatives were given about 10 minutes to present, followed by a five-minute Q&A session.

“Everything I heard today has some applicability to what we’re trying to do in the department and the Joint AI Center,” Shanahan told National Defense after the event had concluded. “This was the beginning of I would say many, many engagements where it really shows a level of collaboration and integration with a much broader community.”

Shanahan described the pitch day as a way to spur dialogue between the government and industry and less so to get a piece of technology on contract immediately. “I don’t think anybody today was expecting to sign anything on the dotted line,” he said.

“A lot of these startups are just trying to figure out how to navigate the labyrinth called the Department of Defense,” he said. “We’re here to help work through [that] and for us to get a better understanding of who we’re dealing with.”

The Pentagon has been making moves to cut acquisition-related bureaucratic red tape that has historically deterred nontraditional companies from engaging with them. The Defense Innovation Unit now has numerous offices throughout the country and is meant to serve as a conduit between the Pentagon and startups. But more work still needs to be done, Shanahan said.

“[We don’t want people to] run away from us saying, ‘I will never work with the department again. It’s too hard to do it. I don’t understand contracting regulations,’” he said. “There’s a lot of work that I have to do personally, we have to do in the JAIC, to figure out … [how] to make it a lot easier for people” to get involved.

And when it comes to developing AI platforms, the department has to engage with burgeoning, nontraditional companies to get ahead, he said.

“How we actually do it? It’s going to be events like this,” he said. “It’s working with DIU, MD5, venture capitalists. The more I understand the VC world, the better I feel about” them being ready to help the department.

It is also important for the Pentagon to show that it is interested in AI ecosystems outside of Washington, D.C. and Silicon Valley, which is part of the reason why the event was held in New York City, he noted.

Greg Ingram, director of business development for Forge.AI, a Cambridge, Massachusetts-based startup, said he is seeing more activity within the department to reach out to nontraditional companies.

“The military moves slowly, even when they say they want to move quickly,” he said. But “things like MD5 and DIU … are all great efforts to try and move things along a little bit faster.”

During the event, Forge.AI pitched its technology which takes unstructured data from open sources — which includes news wires, social media and corporate websites — and transforms it using the company’s AI and machine learning techniques, attaching different values to it such as confidence scores and veracity. That information is then syndicated to its clients as a service.

Melanie Stricklan, chief strategy officer for Slingshot Aerospace, a startup that has offices in Austin, Texas, and Los Angeles, said she has seen signs that the Defense Department is working to speed up its procurement processes.

“I was in the acquisition community for some time and this is the most forward movement I’ve seen beyond talk and moving it into action,” said Stricklan, who served in the Air Force for more than 20 years.

The company also participated in the Air Force’s first pitch day in March, Stricklan noted. During that event, the service engaged with 51 companies and planned to invest up to $40 million into new technology. It was also able to put companies on contract within a few minutes.

Other transaction authority agreements have become popular contracting methods meant to reduce acquisition red tape within the department. But even those take “around 90 days, and that’s still too high,” she said. What is needed are timelines that are more on par with the commercial sector, which means getting on a contract within days or weeks, she added.